Projects funded by the ScienceCampus (summaries and contact persons):

Various digestion procedures for total phosphorus were compared. Extracted materials were dry mass and ash from plants, animal tissues soil and sediments as well as seston. It was not primarily the aim to find a best way, but to identify the most important steps and to make the respective comparisons as a reference available to the ScienceCampus. In addition, the original sources of the methods, reviews and methods comparisons were compiled. We also provide some ashes as a reference material. The already thoroughly prepared work instructions will be regularly supplemented with the aim to create a methodological manual in the long run.

In order to identify measures to increase the efficiency of phosphorus (P) of monogastric animals, we investigated the physiological and transcriptional responses to modulated dietary P supply in growing pigs. The dietary P intake below and above current requirements was reflected in physiological serum parameters like inorganic phosphate, calcium, parathyroid hormone, vitamin D3 and cathepsin K, while the growth performance and feed intake were unaffected. The P supplementation above recommendations persistently affected animals as shown by microstructural bone parameters (increased Bone Mineral Density and Structure Model Index) and altered abundances of transcripts associated with bone morphology. Because of the multidisciplinary collaboration in this project, we were able to reveal the functional biodiversity of the animals regarding coping with a modulated dietary P supply. Genes found to be differentially expressed due to variable P supply are potential candidate genes for improved P efficiency.

Method Development for the Determination of particulate Glyphosate in Marine Environments; Bioavailability of Glyphosate

This study focused on glyphosate which is the active ingredient in commercial herbicide products such as Roundup®. This project was aiming for i. the method development for the extraction of glyphosate from particulate matter, ii. analysis of adsorption properties to soils from agricultural areas in Mecklenburg-West Pomerania and iii. analysis of the microbial degradation capacity and thus, the potential bioavailability of glyphosate for the Baltic Sea. Therefore, glyphosate was adsorbed to particulate matter such as sand, marine sediments with low and high organic carbon content and minerals. Glyphosate was extractable at different pH values depending on the type of particulate matter present. High extraction yields were obtained for glyphosate from minerals. However, extraction efficiency from sediments is insufficient, yet, and needs further improvements for glyphosate analysis from marine sediments. Adsorption isotherms for the soils from areas representative for the lowland landscape of Mecklenburg-West Pomerania indicate strong affinity of glyphosate to the selected soils. Cell culture experiments were conducted with Nodularia spumigena which is the predominant cyanobacterium for the Baltic Sea. The results of this project are currently under survey and will serve as the basis to develop further experimental strategies in order to identify factors which define glyphosate adsorption characteristics.

The aim of this project was to obtain knowledge about the genetic resources of potato with particular attention to the phosphorus efficiency (P-efficiency) and to submit a proposal for a follow up project. The data from the preliminary experiment show that different potato genotypes vary in their P-efficiency, which is in agreement with data from the literature. Based on these findings a project proposal with the topic “P-efficiency of potato” will be submitted to the German “Fachagentur für Nachwachsende Rohstoffe e.V. (FNR)”.

Recycling of phosphorus based organocatalysts through nanofiltration (RON)

In this project we demonstrated the application of organic solvent nanofiltration (OSN) as a sustainable alternative to distillation for the recycling of bifunctional phosphonium salts. We optimized the reaction and filtration process in respect to various process parameters (catalyst, solvent, membrane etc.) Under the optimized conditions the organocatalyst was retained up to 99% and could be recycled four times. The resulting paper was submitted to an internationally peer-reviewed journal. 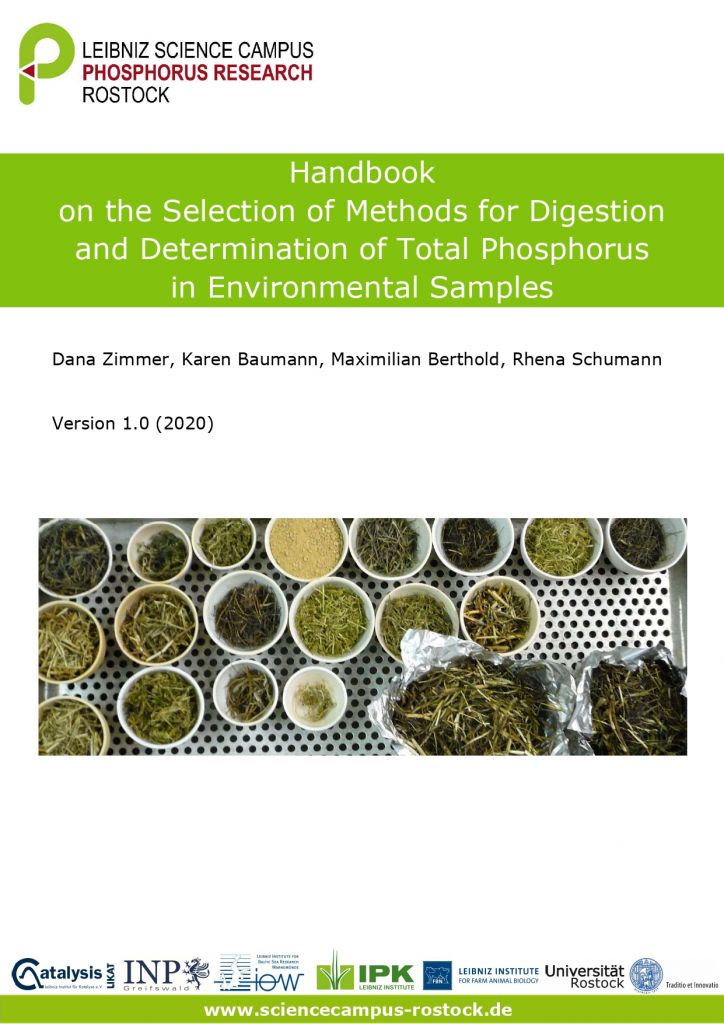 There are various methods to digest organic matter for measuring its phosphorus (P) content. The Handbook on the Selection of Methods for Digestion and Determination of Total Phosphorus in Environmental Samples describes many of the laboratory methods used in P research and compares the data obtained with each one to demonstrate its specific utility. Another focus is the quality management of the analyses. Important parameters are sample and standard precision, correctness, measuring range, and the determination limit, which are explained and illustrated by many examples. Additionally, P concentrations are provided for a wide range of habitats and for animal and plant tissues. This e-book combines the underlying theory with a stepwise method description, appropriate laboratory material, calculations, examples, photographs, tips and tricks.

Individual chapters are e-published sequentially as a collection of pages that are constantly updated. The handbook is available in German and English.